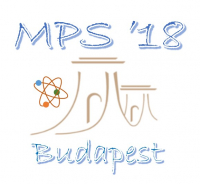 The International Conference on Many Particle Spectroscopy of Atoms, Molecules, Clusters and Surfaces

MPS (The International Conference on Many Particle Spectroscopy of Atoms, Molecules, Clusters and Surfaces, MPS-2018) is a biannual meeting, which deals with physical and chemical phenomena induced by the interaction of charged particles (singly up to highly charged ions, atoms and clusters, electrons) and photons with atoms, molecules, clusters and surface and the bulk of solids and also liquids. The aim is to promote the growth and exchange of scientific information on these areas of atomic and molecular and surface physics. The most recent meetings have been held in Moscow (Russia, 2016) Metz (France, 2014), Berlin (Germany, 2012), Sendai (Japan, 2010), Paris (France, 2008), Rome (Italy, 2006).

To submit abstracts use the templates and mail the doc (tex) and pdf files to mps2018@atomki.mta.hu.